In late March, a fifth grade student was referred to Write On by Kathy Sherman of Hillside School, who had been aware of an experimental cognitive exercise I’d been developing aimed at enhancing fine motor skills in children based on my own research in neuroplasticity. The exercise had successfully improved the handwriting of two other students up until that point, but it had not been implemented into the regimen of a student with such severe difficulty in this area. If it were to work in this case, I knew I would really “have something” with this exercise. If not, it was back to the drawing board.

The picture to the left is of a spelling test the student had taken just before meeting with me for the first time. I immediately had him begin completing the exercise once daily, which he faithfully performed, taking about ten minutes to finish. I cannot reveal a picture of the exercise at this time for copyright purposes, but I can say that it is a series of of tracing patterns I draw daily based on what I have concluded to be the four basic strokes of handwriting, which appear in both random order and size. The object is to increase neural activity in the area of the brain that regulates fine motor skills by giving the brain something on which to concentrate that it does not recognize, while simultaneously practicing the fundamentals of handwriting.

The next image is of three dated samples of the student’s handwriting taken over the span of one month. As you can see, the improvement is drastic in what I have deemed to be the three major components of handwriting—shape, size, and spacing—and most excitingly, it has proven to be permanent.

Along with gaining confidence in classroom activities, the student’s math and reading comprehension evaluations have shot through the roof. I assume the improvement in math is due to his new found ability to “show work,” and the reading comprehension improvement due to the vision therapy component of the daily exercise. We are now entering our fifth month of working together, and have moved on to cursive instruction, as recent studies are quite conclusive in their findings on the value of handwriting as opposed to typing in both essay writing and note taking.

But the real force behind the progress is the determination of the student to achieve something he’d been told was impossible: the ability to write clearly by hand. Unfortunately for many students in his position, classroom teachers are advised to push children with fine motor skills deficiencies immediately to the keyboard without even attempting to resolve the issue, which produces a bevy of negative, unintended consequences.

If you would like to work on solving this problem for a child or student,contact me at pete.writeoncolorado@gmail.com to set up a consultation.

Below is another example of the before and after effects of the exercise with a local fifth grader. 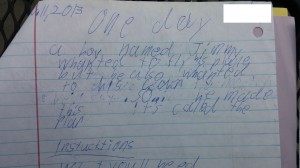 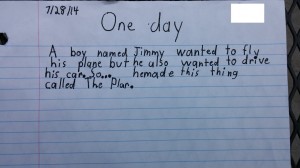 Founder at Write On
IndieEd co-founder Pete Laffin is the founder of Write On LLC (writeoncolorado.com ), a private tutoring and consulting company that finds creative solutions for literacy dilemmas based on cutting edge neuroscience, unyielding positivity, and a tenacity for results. He specializes in handwriting enhancement, and is the author of "Roger That! Handwriting for the 21st Century," (rogerthathandwriting.com ). He also specializes … more »

Our first meeting of the 2018-19 school year will be held on Tuesday, September 18th at noon. IndieEd member Anthony Riske will be giving the presentation. Please inquire for further details!